I wonder what your self portrait would look like?   I have looked at some artists self portraits and wondered what on earth they saw themselves as.   I know you have to allow for artistic license but some look like aliens with no physical reference to life, others were created in a certain style that did not reflect a human face, more animation, a few however did capture picture like faces.     My point is not as an artistic critique which I am not by any stretch of the imagination trying to do, but to make us think how we  see ourselves.   How would you paint?  with a brush or with words, what picture would you make?

I wonder what great master pieces or tragedies or even caricatures would we have as answers.  How do you see yourself? 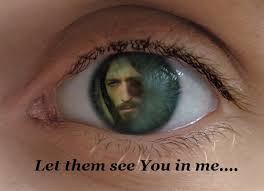 Following creation events happened that changed things for creation and humanity.   Father, Son and Spirit were all involved in creation with the full knowledge, all knowing that the events that would follow creation would bring suffering and wickedness to the creation.

These events had such impact they would twist fundamentally changing mankind completely beyond recognition of his original.    God set a course to fill creation with IMAGERS, humanity that would be the image of God.     Although we now know that that aim of God was never lost the event did change humanity.  The change was such that male and female, humanity lost all reference to their originally along with to who they belonged.   Through the event a loss of all sense of identity or value apart from in relation to his surroundings, experiences and other people.

Humanity became unhinged so to speak and devalued all peoples in all times, to this end that much of our challenge today comes down to this very question, identity and to who do i belong.

I am told by professional psychologists our sense of identity is our ability to look at ourselves as a separate entity among other separate entities.    Practically that means peoples’ way of being at home with themselves is by ‘find themselves’ to see themselves in the context of other entities.

Your identity is impacted by living in culture, in the context of my language, race, location, community, education, family, career, greatest achievement, or deepest disappointment, people find themselves within the context of such.

The great news is that Jesus came to introduce you to yourself and to bring a realisation that our context is eternity.  In that context all those other criteria disappear.  In God before all time began, there was no career, there was no location, language, race. No culture or social structure etc.

We, mankind, have allowed our achievements, our disappointments, our careers, our culture etc. to define us.

God has got a different definition, an eternal definition, you are Gods image and Gods likeness and God will work with us so we can reveal that, becoming sons of God.     Working in us so we can fully be the IMAGERS of God in creation.

God is today and has been since before the Apostle Paul said a mystery has been revealed to him to proclaim, the whole of the bible is God revealing God and this mystery to you and me, it is not a story of getting out of here to heaven but more about revealing the eternal plan of God.     God decreeing and we, humanity participating in administrating that will and decree in our world.

Jn.8:16 Jesus said, ‘If I do judge, My judgement is true for I am not making it alone, out of the narrowness of my own experience, but in the largeness of the one who sent me, my Father.’ (Message Bible) If Jesus said that if his experience is too narrow to make judgement from, whether regarding himself or others, then we have to come to the conclusion that there is a bigger context to our lives than what we have experienced so far!

God through Christ and the Word confront us with what God believes concerning you.    God is set on what God believes about you, God is not like mankind that he should lie or change Gods view, let us get a view of God that empowers Gods view of you is the only way to see yourself.

2 thoughts on “How do you see yourself”