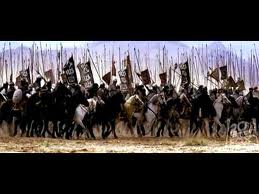 As they gathered their armour shimmered in the sun light, at midday when the sun was high in the sky they stood proud upon the hill-top looking into the valley where their armies stood waiting for the agreed moment for battle to begin.    Swords ready, spears poised, shields raised, men clad in chain and battle armour, horses covered with shining metal all in battle array.   The clash of the realms of Kingdoms.   They stood one invader, one defender, the battle was for the Kingdom.    The King’s sat considering strategies and the fight for the Kingdoms began.

Perhaps this is the most familiar picture that we think of when introducing the language of KINGDOM into every day life.    Two realms attempting to establish or even usurp themselves, Knights, armour, spears, shields, jousting., maidens, chivalry, white horses and all that.     Perhaps its just the hollywood picture we all have.     For sure its two realms that belong to a distant past.

Today the language of the Kingdom of God is more popular than ever, declared from pulpits regularly, taught and inspired, it seems if you don’t have it in your teaching as a Christian you are strange.   I recall the day when we grappled with it as God was unfolding its truth, when it was not so popular.      Yet it is not about its popularity but more about the truth of the Kingdom.   You and I who have ventured out and began our faiths journey, submitting ourselves to King Jesus it is a real realm that we are part of.

Today Kingdom is still challenged by Empires. Empires of the mind, of people, of agendas even by an empirical church.    The teaching has sometimes been over taken to establish this one or that ones control, and certainly not to establish the Kingdom as proclaimed and practiced by the Christ of God.

The kingdom of God Is not about making any person greater, richer or exclusive above any others it is about bringing the order of God to bear on all creation, it is about making mature saints.   Humanity being mature, Christ filling all in all.

In the Matthew 6:33 passage we are told to “seek first the Kingdom of God” these were words that at the time they were spoken were aimed at confronting the world, today they still do that, they challenge our minds, they hold a plumb-line up to our actions discovering where our hearts are focussed!

The Father, from our first introduction breaks into ‘void and darkness’ with confrontation, presenting from the beginning God in action, and so it is with “seek first”.   It makes us stand up and re-evaluate, assess our days, and align with freedom, to seek first the Kingdom of God.

Matthew 6 addresses the “all” of our lives with such simple, direct words, in terms of, if we seek first the eternal, the cosmic realm our needs will be seen too.   We are met with an invitation to bring our supreme loyalty to the King and seek his Kingdom.     In seeking the Kingdom of God we create a following, with all things being added along with the significance of the Kingdom of God.

Jesus said in Luke 4:21, 22 something had been fulfilled, in a room filled with people, with all these eyes fixed upon him, he not only spoke but did something, he “SAT DOWN”, what a scandal, how ridiculous, who did he think he is?   In every synagogue a chair was given as the seat of the Messiah and in this chair the drama played itself out, Jesus sat in the Messiah’s chair!

In this sitting down and declaration he said the word of the kingdom has become fleshed out in me, the kingdom has broken through and the realisation of that is in me.      You have heard about it now see it!      I am the kingdom of God standing in the synagogue

A thought went through my mind while thinking on the Kingdom and its implications,  “We have made songs about the REIGN of Christ and his Kingdom into songs about RAIN on me”

We have been born from above to bring heaven to earth, to be the reign of God on earth and to herald the Kingdom of God in all creation, to declare, sing, live and act out REIGN ON ME!

Jesus brought a blueprint for a new World order not just salvation, he tabernacle in the mankind model,  we have now become the working blue print model of the Kingdom of God. 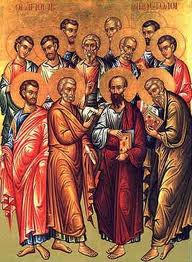 As we advance in the 21st Century and following some of the gains in understanding over the last decades on the Apostolic ministry and its function there are certainly joys of advance along with concerns in our day.   In our travels we find places where no one would receive the apostolic or are reluctant to call any one apostolic, may be a little thinking of ‘it all ended with the 12’.   Alongside this we find a huge growth of the apostolic that seems like every time some one sneezes an apostle is appointed and the apostolic positioned to he higher than others taking control, taking a hierarchical title for position.    Both have the same effect and produce the wrong function and aims and the calling discredited.   Yet for the church the apostolic, just as the other Ascensions Gifts (Ephesians 4:11) are required for the body of Christ to come to maturity, which must be our greatest burden to see the maturity of God creation, ‘Christ filling all in all’, humanity and creation restored to the Fathers first thought and ultimate intention.   It is in the light of these extremes my journey of writing is to discover what is necessary today so I offer these thoughts as we attempt to practice them.   This is the first part of my thought I trust you will enjoy a look forward to the second part.

The apostle is one part of the complement of gifts given by the ascended Christ to our world. These ministries (Ephesians 4:11) are the gifts of the ascended Christ himself. For he “… Gave of himself…” Gifts to mankind, so that Christ will be fully produced in his ecclesia, church.

Without the full complement of gifts (Ascension gifts) maturity and the fulfillment of God’s call will elude his cosmos, creation.

Apostles are those that have the grace and the ability to break through barriers cross boundaries and have a primary concern with the maturing of God’s people.   Apostle Paul said of himself that he laboured “… until Christ is formed in you…” he would only seek to find Christ amongst them. These are clues to the new Testament Church, and the apostles, which are outlined within the pages of the book and begin to paint a picture for us of the church and apostles.

The apostolic grace brings with it and imparts an atmosphere of,  “I can do in this”, it leaves an empowerment, it stimulates within the people of God an ability to cross over, and breakthrough.  Wherever there are boundaries they cross, wherever there are walls they leap over they change environments, there is within every apostle an inherent desire to remove restrictions.

They carry the grace, wisdom and skill in the building of Gods abode, his ecclesia the church. For the apostolic is a “… Wise master builder who has laid a foundation …” (1 Cor. 3:10) They are able to bring God’s ultimate goal and heart to the people of God, in the place of their appointing, and in the times they find themselves in. They are not consultants or advisers, but builders of the house of God

Apostles were clearly necessary in the early days of the church, as recorded in the New Testament, to bring heaven to earth and seek to remove the separation of the secular and the spiritual. They are as necessary today, as then, to bring the church to maturity and release creation from its futility, (Romans 8) as they work in harness with the Holy Spirit to bring about the freedom of the sons of God.

Ephesians 2:20 outlines that the apostles along with the profits they are part of the continuity of God in the establishment of the people of God and the maturing of creation, this foundation of apostles and prophets-which is Christ.   The apostles then have the same effect as Christ, that the Christ is ongoing “radical”, if you follow the etymology of the word radical meaning, foundation, forming a base. Christ was radical as he dealt with our foundation and the foundation of creation, the apostle and prophet equally are radical, in terms of the church the dealing as they deal with foundational matters.

Apostles will be amongst us until the body of Christ reaches its maturity, corporate maturity and the unity of the faith (Ephesians 4:12,13). They will diligently labour until we live in the light of the work of Jesus in the cross, until we are one; the apostle declares aloud that we are one.

Paul an apostle says that apostles occupy a principal place amongst the equipping/Ascension ministries, that is they are to “first apostles” (Ephesians 4:7-11; 1 Cor. 12:28) however earlier in the book of Corinthians he outlines apostles are “…last…” (1 Cor. 4:9), So what did Paul mean? Although Paul lived in a world and was formed by Greek thought, he spoke and wrote from a different vantage point; clearly he had a Trinitarian view of God, and understood the relationship within the Divine family to be one of ‘perichoresis’. That is the constant moving relationship amongst the Father, Son and Spirit, a moving, spinning dance, with each party pouring out themselves to the next, being more interested in the other than themselves, bringing pleasure to one another and filling and enabling each others aims. Each one speaking of the other, each one lifting the other, it is not with a hierarchical thinking and mindset that Paul speaks more about functional necessity, as  in every foundation, that the apostle is first functionality. Yet “lastly” he speaks is to indicate the nature of all apostles as the extension of Christ as the servant of the people of God. Apostolic therefore in position is functionally first but positional last, being the servant of all as Christ.

We see that with true apostolic ministries there is not found any sense of superiority they however known their own going continuity and necessity. Apostles should take on the attitude of the chief apostle, Christ himself who became a servant of all “he came to serve not to be served”. Apostles do not take to themselves position or demand honour, but serve pouring themselves out for God’s purpose.

Apostles have an interest and burden for the design of the house of God, and creation, and bring their craft as wise master builders to bear on the building of the house. Paul used the term wise master builder, but fully understood that there were many other apostolic gifting’s and characteristics involved. As you read the scriptures you realize there are a number of other Apostles also named in the New Testament, who did not belong to the 12, we have James, Barnabas and Paul himself even Andronicus and Junias were held in high regard amongst apostles (Romans 12).  In some church traditions even Mary Magdalene sent to the apostles by Jesus himself is recognized as one sent that the gathered saint did not receive her words, so we are told.

It could be said that the Father is apostolic in nature that he sent himself, sending himself in creation and then sending the Son to explain Him (John 1:18) and from there sending the holy spirit, finally sending the people of God to be the apostolic nature of God. There will come a time when the church becomes apostolic in characteristic and realizes its “sent-ness” into creation.